Final Coat’s E.I.C.C.T., is the most advanced corrosion protection technology available today. Our unique patented surface protection is safe and eco-friendly and is available on all types of trucks, SUV’s, hybrid and electric models.

When installed by your dealer, our corrosion technology slows down the corrosion process by sending a unique AC wave signal onto the sheet metal panels of your entire vehicle, helping to protect all inside and outside sheet metal surface areas.

ONLY OUR PATENTED TECHNOLOGY OFFERS:

ONLY OUR PATENTED TECHNOLOGY OFFERS:

Since our R&D Laboratory was opened in 2007, Final Coat has invested millions to create what has been described as “a unique facility with no peer anywhere in the world,” by Dr. Digby Macdonald, formerly Distinguished Professor of Materials Science and Engineering Director for Electrochemical Science and Technology at Pennsylvania State University.

Studies at our Final Coat R&D laboratory in Hartville, Ohio allow us to isolate and control almost every variable in corrosion testing. This ongoing investment in technology has yielded significant advancements such as our latest generation CM-4000 module, which draws only 0.7 milliamps of current from a vehicle’s battery. We are still unlocking the tremendous potential of our Electromagnetic Induction Corrosion Control Technology (E.I.C.C.T.) and are committed to advancing both the pure science and its application to the automotive industry.

We employ two full-time scientists to lead our corrosion research. Dr. Michael Lewis invented the tech- nology in 1997 and was hired by Final Coat in 2004. Dr. Jason McLafferty joined in 2009. Both scientists, plus two full-time lab assistants, work under the guidance of a world-class corrosion scientist, Dr. Digby Macdonald.

is the inventor of E.I.C.C.T. and the leader of Final Coat’s R&D Department, with a PhD in Physics from Kent State University in 1987. Dr. Lewis has twenty-two patents and invented a new electronic corrosion reduction method in 1997. He has designed various environmental chambers and a Raman spectrometer for surface chemical analysis. While with Cisco Systems, he led a communications systems engineering group where he directed the architectural design of digital signal processing integrated circuits for digital communications and was responsible for the design and direction of several large scale communications computer simulations. As a faculty member and consultant, Dr. Lewis has directed a multidisciplinary materials science research effort to study the relationship between the molecular structure and the third-order optical nonlinearity of metal organic polymers and monomers and has worked extensively in the fields of laser physics, optoelectronics, optical modulation and liquid crystal physics.

has a Bachelor of Science degree in Chemistry from Penn State Erie, the Behrend College. He then worked at Alcoa’s Research Laboratories and became interested in electrochemistry. Based on this interest, he decided to do his doctoral dissertation research with Dr. Digby Macdonald in the Department of Materials Science and Engineering at Pennsylvania State University. He co-wrote two invention disclosures on Regeneration of Sodium Borohydride. Jason graduated with his PhD in Materials Science and Engineering from Pennsylvania State University with dissertation research in electrochemistry. In 2009, he joined Dr. Michael Lewis at our research facility to explore the electrochemical side of our patented technology.

has a Bachelor of Science degree in Electrical Engineering Technology from the University of Akron. From 2000 to 2013 was the lead RF Hardware Engineer at Cisco Systems. While at Cisco designed and developed world class LAN Hardware and RF detector circuits and received his first patent, United States Patent number 7,760,024, “System and method for increasing accuracy of transmitter power detection over a larger range of output power levels”. Hired by Pepperl-Fuchs 2013 as their R&D manager over a team of 17 engineers until May 2017. Along with this he started his own wireless speaker company which was later sold in 2015. Petros has also consulted for Summit Racing, AutoTechnica and Summa Health Systems.

is one of the world’s leading corrosion scientists and Professor in Residence in the Departments of Nuclear Engineering and Materials Science and Engineering at University of California at Berkeley. From 2003 to 2012, he was a Distinguished Professor of Materials Science and Engineering Director for the Center for Electrochemical Science and Technology at Penn State University. Dr. Macdonald has published over 900 papers in scientific journals, books and conference proceedings. He is the author of a book entitled “Transient Techniques in Electrochemistry” and holds 9 patents. In 2003, Dr. Macdonald received the highest award in the field of corrosion science and engineering – the U.R. Evans Award from the Institute of Corrosion in the United Kingdom. In 2011, he was nominated for the Nobel Prize in Chemistry. Dr. Macdonald holds a B.Sc. (1965) and M.Sc. (1966) in Chemistry, University of Auckland (New Zealand) and Ph.D. in Chemistry (1969), University of Calgary (Canada).

HOW TO MAINTAIN YOUR PAINT FINISH

To maintain your paint finish, simply wash and dry your car as required using a car wash soap. Do not use detergents or dish washing liquids, as these are high in alkaline and will damage your finish.

If you want to wax your car, use an automotive wax that does not contain compounds or grit which may damage your Final Coat finish. We cannot recommend specific brands or types of waxes, as we are not sure of their individual chemical makeup. Some waxes include compounds that remove the top layer of oxidized clear coat which may remove your protection.

Specially formulated to protect your interior surfaces against permanent stains from food and beverages.

This eco-friendly product provides a powerful and invisible barrier that remains effective even after numerous spills, with no change to the natural look and feel of the interior surface of your seats, carpet and dashboard.

Our fabric protection has an active ingredient of flouro acrylate polymer. This creates a long lasting layer of protection that penetrates and adheres to the fabric.

Our leather protection is a polymer resin formula with mixtures of organic compounds. This creates a long lasting layer of protection that penetrates and adheres to the leather.

The Final Coat Cosmetic Rust Warranty is automatically applied with the purchase and application of both the Final Coat Electromagnetic Corrosion Protection Module (CM-3000 or BHP-5000) and FCX Paint Protection.

What our warranty includes:

2-part warranty: The first part of the warranty is defined as a paint bubble on the painted outer-body sheet metal panel where no rust and/or bare metal is showing and the paint is not broken, cracked, split, chipped, peeled, delaminated, flaked, worn off or missing around or leading up to the paint bubble.

The second part of this warranty coverage is defined as surface rust damage where the paint is missing, and the surface rust area is at least two centimeters in diameter or larger. The covered areas of your vehicle are the outer-body sheet metal panels — ones that are finish-painted and that someone can see when walking around the vehicle. These areas are the roof, rear quarter panels and front fenders. The doors, engine hood, trunk lid and tailgate are also covered for paint bubbling and cosmetic rust damage that is visible from the exterior of the vehicle, when these panels are in their closed position.

HOW TO BUILD YOUR PACKAGE 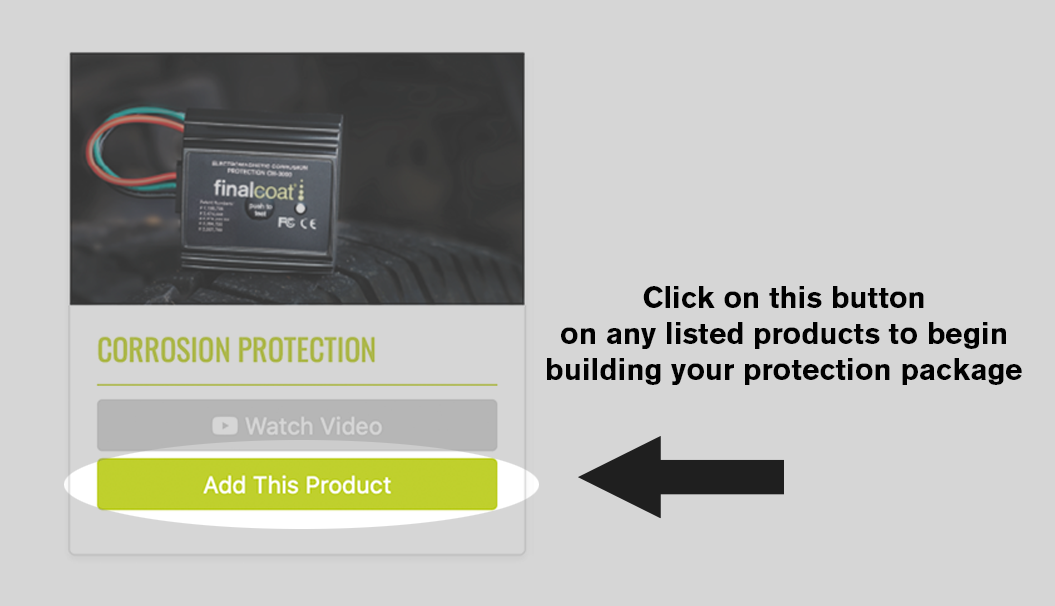 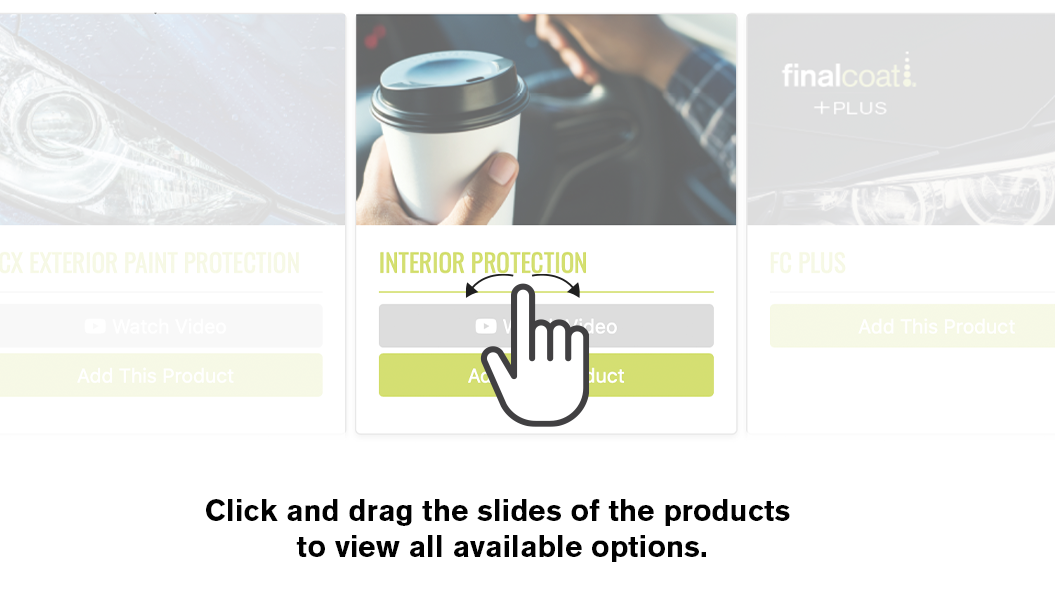 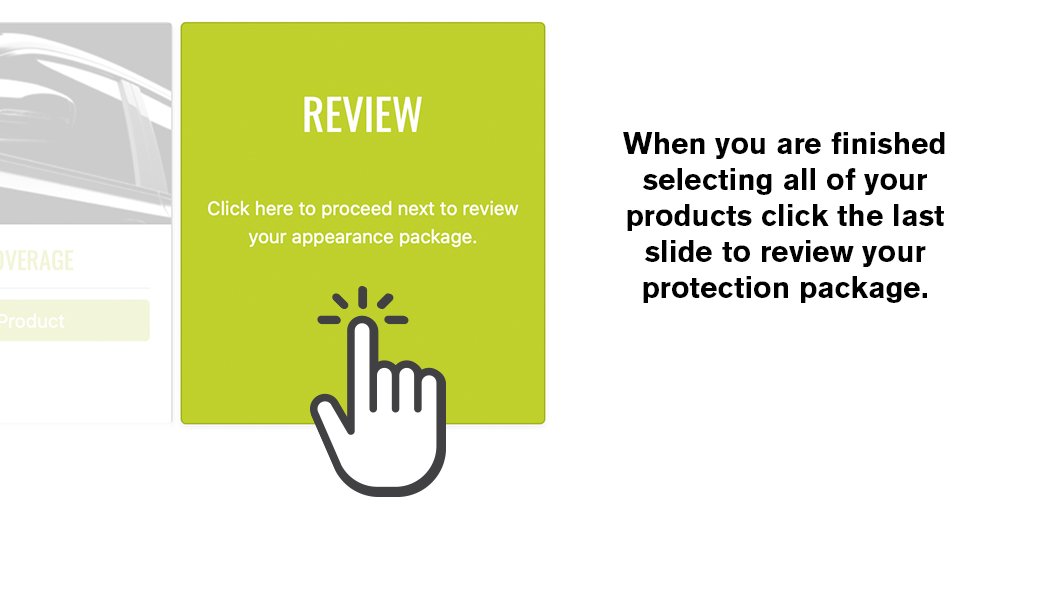